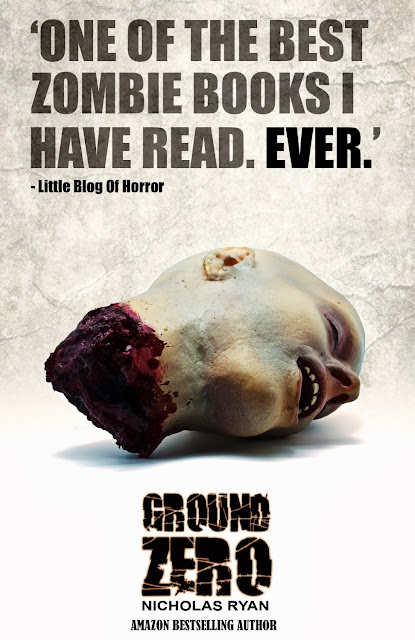 "This is exactly the kind of intelligent, action-packed zombie thriller that fans of DJ Molles and Max Brooks will love!" - ZombieBookBlog

Aboard a freighter bound for Baltimore harbor, an Iranian terrorist prepares to unleash an unimaginable horror upon the United States. The 'Wrath' is an undead plague - an infection that consumes its victims with a maddening rage and turns them into mindless blood-thirsty killers.

Jack Cutter is just an ordinary guy dealing with a dreadful guilt when the virus tears through his home town. Before it's too late, Cutter will have to find a way to survive, and find a reason to fight: HIS REDEMPTION.

Everything I know about zombies comes from the big screen and I have to say that most of the time, for me, zombie movies are down right hilarious or just plain of foolish. So it was refreshing to pick up my very first zombie novel and be enthralled from start to finish. This story was action packed, with plenty of gore and horror to go with it. It was fantastic!

The concept of how the virus came to be and how it spread, was brilliant. It really brought a strong sense of reality to this fiction, and it made the idea of the walking dead all the more believable. I loved how the story started out with separate accounts of how the virus affected individuals, only then introducing us to the MC, highlighting the terror and chaos the virus caused before getting into the main plot line.

Jack Cutter was an unlikely hero, even he admitted it, but he was always looking to do good, to find his redemption and that sometimes put him in danger. He kind of fell into the role of savior, even when he wasn't looking to be one, and it spoke volumes about his strength and character.

This book was extremely entertaining and it kept me on the edge of my seat as Jack and Sam went in search of their Eden. There were some hair-raising moments and very close calls with gnashing zombie teeth. Ryan didn't hold back with his descriptive writing, and it was great to read a horror novel filled with blood and guts. But this book wasn't all zombies, body parts and gore. It also showed the true human spirit. And it showed that even in crisis, there are those who are willing to stand together, to fight, to survive and to help their fellow man, and then there are those willing to take what they can get, only looking out for themselves and sinking so low that they become more of a nightmare than the grotesque creatures created by the virus.

This book was an exciting, thought-provoking read that will thrill horror fanatics. A stunning debut!

To keep up to date with all the latest Nicholas Ryan news and new book release information visit him on Facebook.