Book 2 of Amy Evans' The Pinhold Prophecy Series, ECHOES, has a cover and we get to share it with you today!
Check out how pretty it is and then look below to read all about the title and Amy!
You don't want to miss the awesome giveaway that is going on to celebrate the cover reveal of ECHOES either! Make sure you go to the bottom and enter to win! 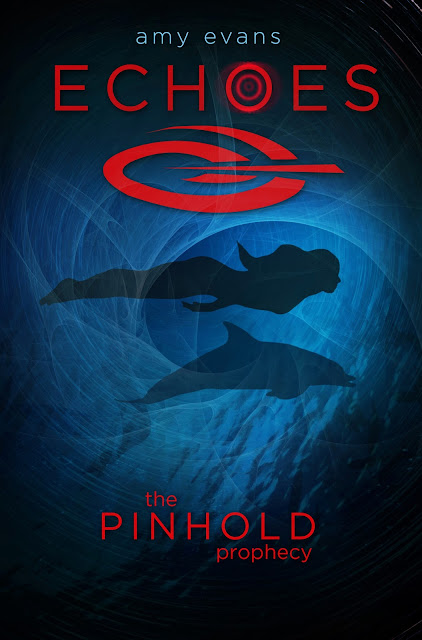 Isn't it pretty? The Pinhold Prophecy Series is a Young Adult Urban Fantasy series filled with mystery and romance. The first book, CLICKS is out now! ECHOES is scheduled to be released in Winter 2014.

Echoes are the sounds the universe makes when you ignore it the first time.

Instead of signs, they are sirens.  Echoes are louder and more dangerous than Clicks.

All the twins on Pinhold Island are healthy again, but the summer is still upside down. Cami's been paying better attention to what hides beneath the eye candy on her seemingly idyllic home, trying to make sense of the new threats to her friends and family. Massive storms have come to Pinhold, flooding the Island in a way not seen in generations. They leave behind destruction and the Red Tide, which lends the Island an eerie glow, makes the air itch and people's eyes burn.  Through it all, Cami and Blake are working hard to repair their relationship, Mica is attempting to trust the grown ups on island, Shay is worried she'll never swim again and everyone is tying to re-focus on the Surf Carnival and training for The Guard.

But the threats to Pinhold from the sky don't compare to the danger that still hides beneath the waves. Can Cami and The Guard find the cause in time to reset the pin, or will they suffer damages that can never be reversed?

About The Pinhold Prophecy Series:

ECHOES is book two of Pinhold Prophecy Series where the fate of the world balances on the head of a pin.

Amy Evans is a young adult / new adult writer who believes that all the best stories get told with kisses. She’s excited to bring audiences even deeper into the mysterious waters around Pinhold Island with this second book in the series. The first novel, CLICKS, is a romantic coming of age story about hot lifeguards and surf competitions with dashes of sci fi and dolphins on the side.  It’s available at Amazon and everywhere books are sold.
|| Twitter || Tumblr || Facebook || Blogger || Website || Pinterest || Amazon || Goodreads ||