We join Grapevine Book Tours in presenting the new cover for:

Twenty-nine year old wild, carefree, and brutally sarcastic Amanda Bishop thought her three rules for dating would weed out unworthy suitors. And they did. Until she met Shane Reed, her smart-ass, sexy-as-sin CrossFit coach who pushes all her buttons. He’s the man she loves to hate. But when the hate begins to ebb away, and is replaced by feelings she can’t handle, Amanda hides behind her rules. Will the electric chemistry she feels with Shane allow her to get beyond a painful past, or will she push him away with her rules? Rules that make her the ultimate Sex Snob.

** Sex Snob is a spin-off of Pieces of Perfect but can be read as a stand-alone novel. **

Chapter 3: Shane to the Rescue


I was cackling hysterically at a story Cedric told about how his boss walked around for an entire day, oblivious to the fact that he had a pair of women’s underwear hanging from the back of his belt like a tail, when I felt a strong hand on my bicep. I spun around, expecting someone from my gym, and then froze.

It took a moment for my brain and my mouth to get back on the same page. Eventually, I was able to mutter a single, meek word: “Nate.”

“Hi, Amanda,” he said smiling. Smiling? This asshole is smiling at me. The fucker!

“Hi,” I replied, looking every bit as confused as I was. “Where did you . . . what are you doing here?” The group I had been talking to backed away slightly to give us more privacy. But that wasn’t what I wanted. I didn’t want to speak privately with Nate. I didn’t want to speak to him at all. My breathing accelerated as panic rose in my body.

“I was just meeting some friends. What about you?” He casually took a sip of his beer, looking at me expectantly.

He was so calm, it made me want to gouge his eyes out and feed them to a sewer rat. The thought of eyes caused my own to slip quickly down his body. He looked good. Damn good. He actually looked exactly the same as he had when I last saw him about four years ago, except that his hair was slightly longer.

“Hmm, that’s nice. You’re looking good, Amanda. Really good.” He smirked down at me, his eyes roaming freely over my body.

His comment disarmed me, and I had no idea how to respond. Jesus Christ, Amanda, snap out of it. This wasn’t like me. I wasn’t this shy, self-conscious, pathetic girl. But, right now, with Nate standing barely two feet from me, this was the girl I had become. The real me fled, and was hiding behind harsh words and devastated tears from four years ago. Well, shit.

I was staring down at the floor, willing my sarcasm to come back to me so I could tear this asshole to shreds. And as I stood there, struggling to find words, I felt an arm wrap around my shoulders. My head jerked up when I heard his voice.

“Hey, baby, where ya been? I’ve been looking for you.” Shane pressed a brief kiss to my temple. I nearly wiped it away on reflex. “Hi, how are you? I’m Shane, Amanda’s boyfriend. And you are?”

Wait, what? My boyfriend? What is happening here? Is Shane . . . saving me? I didn’t know whether to be grateful or horrified.

“Oh, small world,” Shane replied smiling, though it didn’t reach his eyes. He gazed impassively at Nate. I stared at Shane like he was Big Foot.

Nate started to reach out his hand, but when Shane made no movement in return, Nate ran the hand through his hair instead and then walked off.

“Who the hell was that prick?” Shane asked, dropping his arm from my shoulder.
“I . . . he was nobody. Just . . .” I took a deep breath and willed myself to calm the fuck down. “He’s just some pompous douchebag I used to date.”

“Interesting,” Shane mumbled before taking a sip of his beer. “You okay? Your whole body tensed when you saw him” he asked.

I nodded slightly, my head cast down toward the floor again.

“Hey, Amanda, look at me,” Shane said softly. When I didn’t comply, he placed his hand beneath my chin and raised my head for me. The look on his face was one of concern. He wasn’t mocking me, like I would have expected.

But somehow, the concern was worse. I didn’t need his pity. Nor had I needed him to pretend to be my boyfriend. Except . . . maybe I had. No, I pushed that thought from my mind. I didn’t need anyone. I had just been caught off guard. I could have handled Nate. The real Amanda was flooding back into me with a vengeance. And right as I was about to tell Shane where he could go stick his white knight act, I stopped. He had only been trying to help. There was no need to verbally eviscerate him when it was actually Nate I wanted to yell at. I took a deep breath and let it out slowly.

“Sorry,” I said finally. “I’m fine. I just didn’t expect to see him. It caught me a little by surprise.”

“What’s your poison?” he called over his shoulder as he made his way toward the bar.
“Stoli and cran,” I yelled after him.

He was back fairly quickly, considering how packed this place was. He handed me my drink and then placed his hand on the small of my back and ushered me to a few stools that lined the wall.

“Thanks,” I said sincerely, hoping it covered more than just the drink.

“No problem,” he said, staring intently at me, letting me know that he understood.

I needed to lighten the mood and reassert myself in my body. “So, is that how you pick up chicks? You just saunter up to them, refer to yourself as their boyfriend and hope it sticks?” I said lightly, my smile wide.

“It’s probably more effective than your tactic of staring at the floor and letting all the color drain from your face,” he smirked.

Embarrassment crept through me at his words and I worked hard to keep my eyes trained on his. “It’s the damsel in distress technique. I feel it worked quite well. Got you to buy me a drink, didn’t it? Sucker,” I said with a laugh that was only partially forced.

“That it did. So, are you insinuating that it was me you were trying to pick up in that situation?” He lifted an eyebrow and gawked at me in that annoying, cocky way he has.

“No, I was just trying to give you some pointers. Show you how it’s done,” I quipped. I was a bundle of nerves and emotions. Are we flirting right now? Do I like it? Fuck.

“Oh, was that what that was? A lesson for me. How kind of you.” He rolled his eyes playfully, and I had a sudden urge to tell him the truth about Nate. I can’t explain why, but I wanted him to know it. To know me. 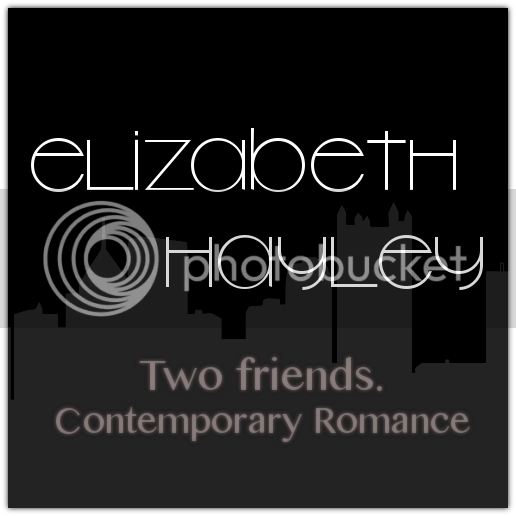 
Elizabeth Hayley is actually “Elizabeth” and “Hayley,” two friends who love reading romance novels to obsessive levels. This mutual love prompted them to put their English degrees to good use by penning their own. The product is Pieces of Perfect, their debut novel. They learned a ton about one another through the process, like how they clearly share a brain and have a persistent need to text each other constantly (much to their husbands' chagrin). They are currently getting ready to release Sex Snob, a novel centered around Lily’s roommate Amanda, and have also begun writing the sequel to Pieces of Perfect.

“Elizabeth” lives with her husband, one and a half year old daughter and nutjob of a dog. “Hayley” lives with her husband and her own crazy dog. They are about to adopt a newborn son in November. Elizabeth Hayley's writing motto is best captured by the words of Patrick Dennis: “I always start with a clean piece of paper and a dirty mind.”