Release Day Blitz: Review + #Giveaway: The Only One by Magan Vernon

The Only One by Magan Vernon 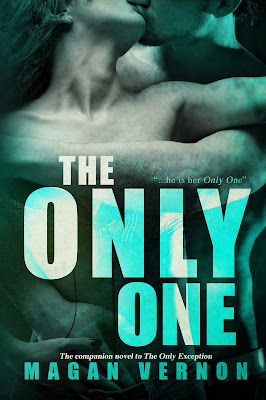 Honor student, manager at the campus coffee shop, owner of an impressive sweater collection – Melanie Wilder has it all together. Then John “John Boy” Walden strolls into her life wearing nothing more than an impish grin and all-too-revealing loin cloth.

Soon, make-out sessions replace homework, lust triumphs over work. And to further crumble her perfect world, an unexpected phone call threatens to take away everything she’s worked for.

Now, as Melanie struggles to pick up the pieces, she realizes that John may be the only one to put her life back together…unless he shatters it first.

Their differences threaten to tear them apart, unless they can make one another their only exception. 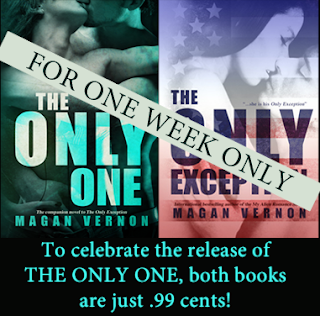 To celebrate the release of The Only One, Magan is placing it and her previous book, The Only Exception, on a "one week" sale for .99 cents each! 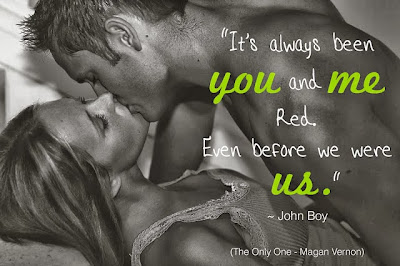 I really want to say that I loved this book from start to finish, but I can't. I enjoyed the beginning, the characters were fun and there was plenty of sexual tension and chemistry. My heart broke for Melanie when she got her bad news, and I was glad that John Boy was there for her when she really needed it. He stayed by her side throughout it all and it made me question his bad boy, player status. But at some point I got a little bored.

Mel and John's relationship became a little predictable. They'd try their best to be friends, nothing more, then John would do something stupid, sometimes unintentionally, Mel would fight with him and a second later all was forgiven. I know she was going through a serious crisis but I wished she'd have been a little stronger when it came to giving in to John. He may have been sexy but that didn't excuse some of his behavior. Mel also became a little annoying, and I could understand why her sister told her to stop wallowing in her own pity. Maybe I'm being too harsh, but I just expected more character from Mel.

For the most part, this book was a fun, quick read. I just wish I had connected with the characters more. With so much tension and emotion filling the pages, I wish I had felt more. Unfortunately, it didn't quite live up to my expectations.


Magan is giving away a necklace, edited “chapter 14”, and a coverflat with the playlist, handwritten.

Magan Vernon is a Young Adult and New Adult writer who lives with her family in the insurance capital of the world. When not writing she spends her time fighting over fake boyfriends via social media. You can find her online at www.maganvernon.com.

Email ThisBlogThis!Share to TwitterShare to FacebookShare to Pinterest
Labels: Giveaway, InkSlingerPR, Magan Vernon, Release Day Blitz, Review, Sale, Teaser, The Only Exception, The Only One