I was so excited when I got to read Rachael's Preservation series, because it was so amazing, and when I realized I already had the first two books of The Resistance Trilogy on my Kindle, I wanted to kick myself for not reading them earlier.

Thanks to the super amazing JKSCommunications team, I was given the opportunity to read the entire series!
Check out my thoughts below.

Knowledge changes everything…
Hoodoo-influenced Southern Louisiana seems like the perfect place for Camille to escape her abusive past and dysfunctional family. She doesn’t expect to fall in love with the handsome Gavin Devereaux and plummet into the world of Amaranth, a place of exile for reformed vampires.
Wrestling to escape a deadly ex-boyfriend while giving Gavin a chance, Camille is confronted with decisions that threaten not only her life, but the lives of her inhuman friends she has come to love. Entangled in her friends’ quest for freedom, she dives into their realm and faces the threats of Amaranth’s ruler—the mother of all vampires—and her own inner demons.
Now Camille must decide whether she will derail her life and make the ultimate sacrifice for the monsters that interrupted her bumpy path back to sanity—what she still wants so desperately—or escape with Gavin before it’s too late for both of them.

I was really excited to dive right into this series. After having read Wade's Preservation series, I discovered what an amazingly talented author she is, and there was no turning back. The fact that she writes Paranormal Romances as well, that just called for a celebration.

As usual, I didn't read the synopsis for this book before reading it, so I was intrigued by what sort of paranormal being I'd find between the pages. Vampires have always been one of my favorite mythical creatures, and the twist Wade put on the old myth was fresh and unique. Vampires who choose an alternative way of living is not something new, but vampires who seek to lift their curse so they may be human again, that was a fresh approach to the norm. It came with a sacrifice, one that sometimes worked in their favor, and at other times tore them apart. My heart broke for Joel. He was sweet and obviously loved Arianna, their story alone was a tragic love story. Throw in a few witches, along with the hybrids who used them, and there was sure to be an explosive mix of action and adventure.

The story was well paced, giving away just enough information to the reader but without delivering everything in one huge info dump. The more Camille learned about her friends, the more I was drawn into their story. A mix of emotions washed over me as love and loss played havoc with these characters whom I'd quickly learned to love. Even the wicked ones, who were so cleverly written that I couldn't help enjoying their evilness, found a place in my heart.

Camille was such a great MC. She'd been through so much in her life and she deserved to find happiness. Her true strength and character showed when she ran right into the arms of evil to save the one she'd found that happiness with. That fact that she was a human in a world of vampires never deterred her. Of course it was a stupid, although brave, thing to have done. But, sometimes love gives us the courage to go to the ends of the earth, even to another realm, for those who hold our heart. And we just have to go with it.

This was an enticing start to this fantastic trilogy and I cannot wait to see what more lies in wait for Camille, Gavin and the rest of the Amaranthians. Will they defeat Samira and gain their humanity, or will true evil reign?

The Gates (The Resistance Trilogy, #2)

Getting There is Half the Battle…
Armed with more unsettling knowledge about Gavin Devereaux and her circle of friends, Camille Hart is faced with new adversities and lethal propositions when she returns to the Amaranth exile to carry out Gavin’s risky crusade.
Realizing her journey through the bayou was only the beginning of her struggle to stay with Gavin, she finds that leaving her Louisiana home is the least of her worries. New evils await her on the other side, and as she and her friends press on with their mission, they are confronted with the reality that everything doesn’t always go according to plan.
As secrets unfold and alliances are formed and broken, only the strongest will survive and the power of love will be tested when a war between witches, humans, and vampires erupts into an all-out power struggle and all is on the verge of being lost.

This book continued from where the first ended. The Resistance were ready to take down Samira in the hopes of gaining their humanity. I was a little shocked when the plan was to walk right back into Amaranth, and back into Samira's open arms. It seemed like a suicide mission, but I had faith that Gavin knew what he was doing. I was even more surprised that Samira didn't raise more hell. After Camille and Gavin escaped in book one I would have expected her cruelty to be unleashed the minute they set foot back in her palace.

But as old friendships were rekindled, and new ones formed, the threat of deception became more evident. I had to wonder who could be trusted and who would be the one to betray the Resistance. Camille and Gavin's love was tested one more than one occasion, as well. But their bond was strong and no amount of seduction on one particular skanky vampire's part could force them apart.

This story was wrought with tension as she characters faced even more obstacles than ever before. Samira proved to be even more wicked than I gave her credit for, and she seemed to really enjoy the game she played with Gavin. He was put to the ultimate test when Camille's life hung in the balance. And then a new twist to the story changed everything. Forcing a new alliance that saw old enemies unite for a greater cause.

Wade threw so many curveballs at me throughout this story and I'm lucky to have come out unscathed. The story intensified to another level and I'm highly anticipating the final book in this trilogy.

The Tragedy of Knowledge (Resistance Trilogy, #3)

The Battle Comes Home.
After arranging a hopeful but risky alliance during their visit to the Amaranthian realm, Camille, Gavin, and the resistance don’t have much time to recover from their failed mission. Forced to create a new strategy to achieve their goal, they embark on a different mission—one that possibly holds the missing key to their quest for victory, and their deadliest one yet.
As they attempt round two to restore peace and freedom for their kind, they must rely on help from the living, the bayous, and beyond to decipher allies from enemies, good magic from bad, and whether the source claiming to lead the way to their destiny can be trusted. Racing against the clock to solve the mystery of their fate, they find the battle has come right to their doorstep, and this time, everyone must pay a price.


This book was an epic conclusion to a fantastic Paranormal Romance. Filled with even more action and adventure, as the final battle to defeat evil loomed. I was excited to see Camille kick butt. I wasn't sure if she could become more awesome than she already was, but she did; even as she adjusted to her new lifestyle.

She became a more valuable player as the story unraveled. There was a lot of mystery behind the freedom Gavin and the Resistance sought, and Camille was very much a part of the key to getting rid of Gerard. As the pieces fell into place, my heart broke when the final step to ridding themselves of Gerard came to light. It was a bitter sweet moment. Of course, there was no way Gavin would allow Camille to make the sacrifice alone, he was just amazing like that. I'm not sure if I'd have had the strength to watch my friends walk away. I'm sure it couldn't have been easy for either of them, but sometimes sacrifices have to be made to save those you care deeply about. And in doing so, both Gavin and Camille claimed back their humanity.

They may not have found the future they were looking for but they had each other, and they had more to live for than they'd ever thought possible.

This trilogy was an exciting mix of love, tragedy, mystery and intrigue. Paranormal Romance fans will enjoy it from start to finish. 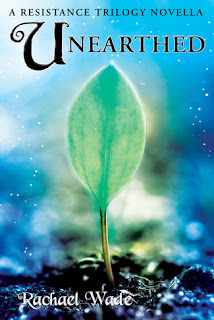 *Warning*
This is a short novella (approximately 25,000 words) and is intended to be read after The Tragedy of Knowledge. It takes place after the events of The Resistance Trilogy.
For Gavin and Camille, the Amaranthian war is over. But they’ve evolved since then, and so has the realm they’ve come to know as home. Now comfortable and happy in their new life, they soon discover that something groundbreaking is brewing, threatening to disrupt the peace they’ve worked so hard to secure. And whether they’re prepared or not, it’s about to be unearthed.


ABOUT THE AUTHOR
Rachael Wade is the Amazon bestselling author of The Preservation Series, The Resistance Trilogy, and the upcoming sci-fi series, The Keepers Trilogy. When she's not writing, she's busy learning French, watching too many movies, and learning how to protect animals and the environment. Visit her at www.RachaelWade.com and www.LightsOnOutreach.com.